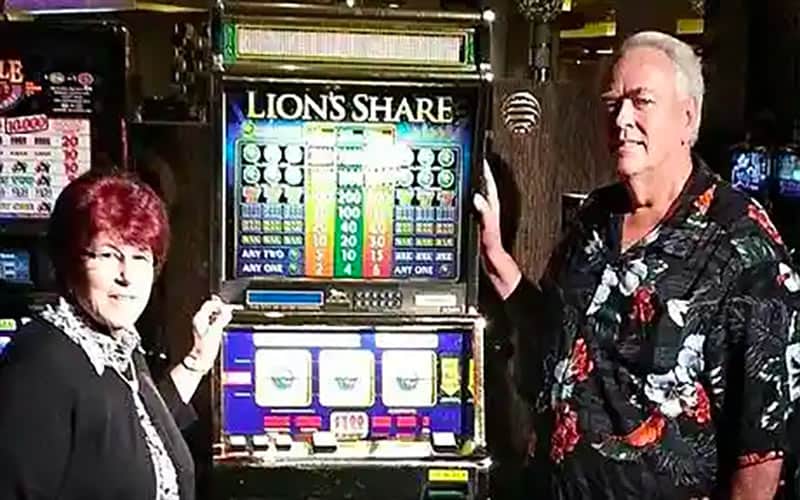 On August 22, 2014, a lucky US couple from New Hampshire hit the $2.4 Million jackpot on the Lion’s Share slot machine at MGM Grand Casino. The slot machine had not paid out a jackpot in nearly two decades, so the payout was huge for the winners.

According to casino employees, the couple had only been playing the game for 5 minutes when they watched in amazement as the reel symbols lit up for the jackpot win. The MGM Grand Casino is extremely happy for the couple and has been looking forward to this payout for nearly 20 years. Lady Lucky was indeed smiling upon Walter and Linda Misco on their trip to Las Vegas!

When the MGM Grand Casino Hotel opened in 1993, there were approximately 50 Lion’s Share slot machines present as an homage to their MGM lion mascot and icon. There is now only one of these machines left, and it hasn’t paid out its progressive jackpot in nearly two decades, rendering the total at over $2.3 million at the time of this writing.

This single slot machine has become one of the most popular sights on the strip, and according to MGM management, it is played at least 5 times as much as any other slot machine on the property. It is celebrated by players daily and has earned its own following slash fan club, as well as its own set of superstitions (which comes with the territory when you’re talking about die-hard slots aficionados).

It is probably the most famous casino game in Vegas, with loyal players who have been trying to win that jackpot for over a decade. Players have been known to stay at the game for more than 6 hours at a time, with a steady line of hopefuls waiting for as long as it takes for their shot at the game.

There are even stories of people becoming good friends with other players as they all wait for their turn, and nurturing those friendships through regular encounters waiting in line. A lot of the game’s “groupies” are dedicated to devoting at least a portion, if not all of their gaming session to the Lion’s Share on a regular basis.

The reason players are so committed to returning to play this particular game is because there is a belief that the machine is ‘due’ to pay out soon. Most experts don’t believe in that concept, stating that each spin is completely random and independent of every other spin, hence all spins have an equal chance of winning.

Most players can’t kick the notion that the Lion’s Share jackpot payout is ‘due’ after nearly 20 years of quietly growing to its multi-million dollar status. Some players don’t believe it is ever going to pay out, while other players, such as the well-known Wizard of Odds, believe that there is something amok with the game due to some personal experiences he has had playing.

There are reports of players who have developed superstitious rituals that they execute during gameplay, as well as players who believe they need to play at a certain time of day. The devoted slots fan is typically a little superstitious, and the followers of the Lion’s Share are no exception.

You will see a visit to this game mentioned on ‘must-do’ lists from travel websites that help you plan Vegas vacations, as well as families who have passed the torch from father to son in their quest to hit the winning spin. The Lion’s Share slot machine has its own Facebook page and Twitter following, and jackpot figures and gameplay are tracked by multiple websites and blogs.

So why is this old slot machine still around when there are so many newer technology options? Nevada law dictates that it cannot be decommissioned until it has paid out at least 75% of the money that has been paid into it, which would require someone to hit the jackpot. Casino management denies that the slot machine has had its odds manually adjusted or reconfigured in any way, or that any type of tampering has ever occurred, though certain industry professionals do not agree.

While not all players are 100% convinced that the game is on the up and up, the majority believes that the Lion’s Share slot machine game is destined to go down as a Las Vegas legend, and will be a treasured part of Vegas life regardless of whether anyone finally wins that jackpot or not.

Take your shot at some vegas online slot jackpots and play at some of our recommended reputable casinos.