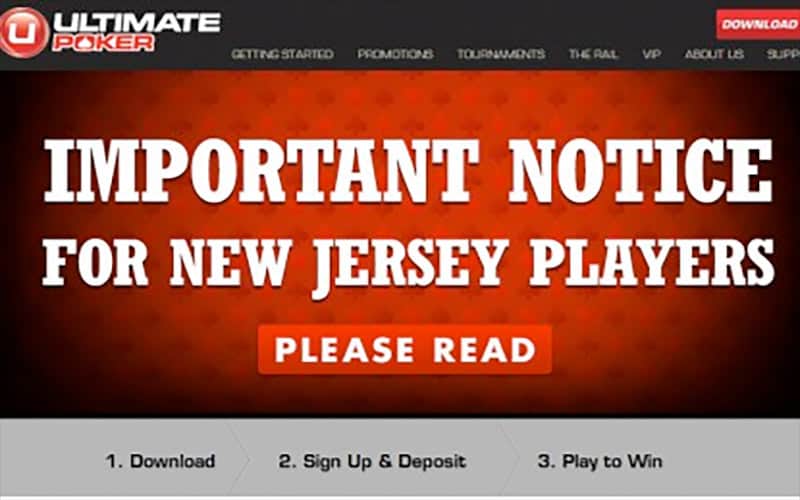 The success Ultimate Gaming has enjoyed in Las Vegas online poker did not transfer to New Jersey. Announcing just last week that they were pulling out of Garden State online gambling operations, their competition may have had more to do with that decision than any alleged inability on their part to provide a viable product. WSOP teamed up with 888 Holdings to deliver their New Jersey operation. Borgata partnered up with bwin.Party to run its software, and the 2nd or 3rd largest online poker provider in the world, PartyPoker, runs a single site that shares player pools with BorgataPoker. Those 3 online gambling entities enjoy a couple of things that Ultimate Gaming did not – excellent brand identity and a top-level partner to handle the back-end management of the operation.

With recent casino closings in New Jersey, sliding traffic across most online gambling sites in that state and a less than rosy immediate forecast, does Ultimate Gaming’s departure spell doom for the New Jersey and virtual gambling market? After all, their Nevada online poker operation is very successful. So why didn’t it work in New Jersey? Aside from the above argument that their competition was exceptional, they also were up against quantity as well as quality. New Jersey offers 14 different cyber gambling choices for its residents, and also claims one of the smallest populations of any US state. That combination was going to make it difficult for any “late to the table” Internet gambling company trying to establish a toehold in the state.

To give you an idea of the numbers, Ultimate Gaming earned just over $4.9 million all of this year. In 2014 so far, the Tropicana itself has taken down over $14 million in table game revenues. And that is without offering an online poker room. Those big 3 operators mentioned earlier run more than half of the websites which offer Internet gambling options to New Jersey residents. They also claim contracts with the biggest casinos in that state. That combination is going to make it extremely difficult for even a well-known brand name to chip away at market share in the Garden State. And even the smaller virtual gambling sites are being handled by experienced companies. For instance, Golden Nugget joined Bally Technologies for its NJ online gambling venture, with Trump Plaza allowing the experienced European gambling provider Betfair to run its operation.

Some industry analysts and others have wondered aloud how much the impending bankruptcy of the Taj Mahal had on Ultimate Gaming’s decision. The Taj owes Ultimate Poker $1.5 million, and has not paid the company in months. That website also had to handle its own promotion, since their proposed deal for advertising on the property was not accepted. Operating as a stand-alone entity made things difficult from the start for Ultimate Gaming, the recent slowdown in the industry in that state did not help, and battling 3 experienced and established Internet gambling operations meant an uphill climb all the way.

It probably did not overjoy Ultimate Gaming execs that NJ Senator Lesniak has stated publicly that PokerStars is only “weeks, not months” away from receiving licensing for an iGaming operation. Ultimate Gaming was last in state revenue, and the PokerStars announcement just meant more bad news for the company. Since PokerStars went from possibly entering in 2015 to probably receiving New Jersey licensing by Thanksgiving, Ultimate Gaming was smart to cut their losses and make the announcement when they did. When states like Rhode Island and West Virginia decide to offer Internet gambling, a young up-and-coming portal like Ultimate Poker may be perfect. Those smaller states are limiting the number of websites which deliver virtual gambling options, now that they have had time to use New Jersey and Nevada as online gambling guinea pigs.